When does Registration process commence and finish?

How do I Register?

You will need a Mynetball ID number and a password to register online. Your registration login will either be your ID number (7 digits) OR your email address.

Click Register Here to be taken to our registration links.

How much does it cost to register? 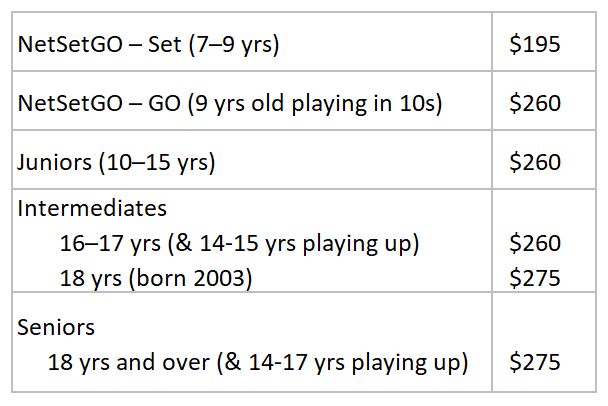 We are holding a Registration Day on Saturday 6 February at the South Sydney Graphic Arts Club from 9.00am to 11.00am where you can register with help from a committee member.
It will also be an opportunity to buy merchandise (include playing uniforms).

The Mynetball accounts are administrated by Netball NSW, not the Mascot Netball Club, thus we cannot unlock your account. You will to go to the Login page (Mynetball) and enter ID number, then click on “Forgotten your Password”.

You will then receive an email from Netball NSW asking you to follow the link in the email to create a new Password.

What is my age group?

What is an Active Kids Voucher?

Mascot Netball Club is an approved provider for the $100 Active Kids Rebate which parents can claim from 1 January 2021.

Make sure you have your Active Kids Rebate Voucher Reference Number (16 digits) before you commence your registration process on Mynetball.

To obtain the rebate and get your voucher number, go to Active Kids Program at Services NSW and review this instructional video.

I have 3 children playing for Mascot

If you have 3 children (under 18 yrs or students) playing for the Mascot Netball Club, you are entitled to a registration discount for that 3rd child.

Please send an email to the Treasurer with your details to treasurer@mascotnetballclub.com.au

NetSetGo is Netball Australia’s junior entry netball program for ages between 5 to 10. It had been developed to provide children with the best possible learning and playing experience to develop a positive introduction to netball.

THE COMPETITION & MY TEAM

What are the Competition Dates?

Where are the games played?

What Time do I play?

When will I know what team I have been placed in?

Not until after the grading process has taken place for the junior players – by the first week of March.

When will I know who my coach is?

Once teams have been finalised, volunteer coaches will need to be sourced – by late March.

The aim of Grading is to form teams in an age group which have a balanced group of players with comparable skills and similar ability across all playing positions. There are many aspects taken into consideration such as player experience, ability, fitness, attitude and playing positions.

The players trialling and team selections be selected based on player’s performance at the trials, together with last year’s feedback from 2020 coaches.

Do I have attending Grading?

When and where is Grading?

What if I am unable to attend Grading??

If a player is unable to attend grading please send an email to the club, outlining the reason for the non-attendance and your expectations relating to grading.

For example, outline if you think the player has the ability to play in top two teams in her age group, or alternatively, if you are happy for her to be graded into a similar team as last year.

I am 11 to 15 years and attend Grading and miss out on being selected in the ‘top 2 teams’.

If you attend Grading and are not selected in the ‘top 2 teams’ (top 16 players), you will not be automatically placed into the 3rd team. You will be placed back into the pool of players in your age group and placed in a team based on previous years’ information and coaches feedback.

Can I play up in a higher age group?

Yes. A player may request to play in a higher age group, however, the final decision to do so will be made by the Grading Committee and Registrar based on team numbers.

Click the box “Play in a higher group” on the registration form.

On occasions, players may be requested by the Club to play in a higher age group. This will only occur when the required numbers for a team are not reached.

Can I play with my friends?

Juniors (10 years) – No, you cannot request to play with friends. As a result of the grading process if you and your friends have similar skills and ability, you may be placed in the same team.

Juniors (11 to 15 years) – No, you cannot request to play with you friends. The ‘top 2 teams’ in each age will be selected as a result of Grading; the remaining teams will be selected for those players who choose not to Grade

NetSetGO   Intermediates   and   Seniors – Yes. Make an appropriate note in the “Team Placement” field on the online Registration Form.

Can I form my own Team?

Junior Teams (10 years) – No. Teams will be selected based on Grading and you will be placed in teams with similar skills, ability and attitude.

Juniors (11 to 15 years) – No. The ‘top 2 teams’ will be selected based on Grading. Those who do not attend Grading be placed in teams based on previous years’ information and coaches feedback.

NetSetGO   Intermediates   and   Seniors – Yes. Make an appropriate note in the “Team Placement” field on the online Registration Form.

How & where can I buy a Uniform and other Merchandise?

How much does the merchandise cost?